The Centenary of the strong friendship coined in the World War I will be commemorated in Serbia and France in 2018. This also represents the best possible basis for the development of the political dialogue and economic and cultural exchange 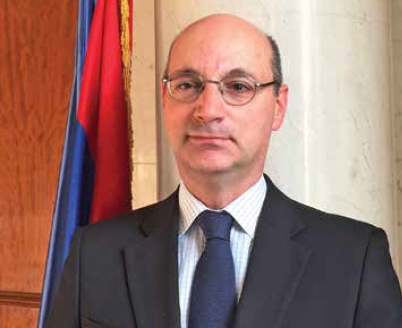 What are the main priorities of the French foreign policy in the Western Balkans and Serbia ?

France is dedicated to ensuring stability, prosperity and EU accession in the Balkan region. These priorities are the same regarding Serbia and I would like to commend the results achieved so far by Serbia in the EU accession process – especially in the economic field. Challenges remain ahead, especially regarding rule of law, freedom of media, fight against organized crime etc. France will be supportive of the efforts Serbia will undertake in these directions. More generally, France is eager to deepen further the concrete actions comprised within the Berlin Process, to ensure an increased stability in the Balkan area and better economic conditions and standard of living for the population.

Which key messages from the French president did you relay to the Serbian president and Serbian citizens ?

The French and Serbian presidents recently had the occasion to meet in Paris, on the margin of the “One Planet Summit” and could exchange directly. During the meeting I had with President Vucic, when I handed him my credentials, I highlighted our appreciation of the good economic results reached by Serbia and our appreciation of the Serbian contribution in UN and EU peace keeping missions, of Serbia’s efforts regarding the regional stability and normalization with Pristina – the opening of an internal dialogue on Kosovo being a positive behavior on this sensitive question. I also mentioned to President Vucic our attention concerning the negotiation process of chapters 23 and 24, through reforms on the independence of the Judiciary, anti-corruption etc. At last, I insisted on the will of France to develop further our bilateral relations to bring them at the highest possible level. The Centenary of World War I victory in 2018 will be an excellent occasion to commemorate the traditional French-Serbian friendship and to build an even stronger common future.

To what extent are strong historical ties between Serbia and France contributing to boosting the current bilateral relations between the two countries ?

France and Serbia have a long historic tradition which could be traced back as early as the Middle-Ages with Hélène d’Anjou. These old ties turned into a strong brotherhood at arms during World War I, when French and Serbian soldiers fought together the liberate Serbia. This strong friendship will be commemorated in 2018 with the aim of keeping this memory alive in our two countries. Such a common memory represents the best possible basis for common work in the future because it represents a source of mutual confidence and trust – a feature which is most important for the political dialogue, both bilateral and European, but also for the business community. Furthermore, the Centenary that will be commemorated in 2018 will be a unique opportunity for Serbia to communicate positively, in France, on the economic and tourism opportunities it is able to offer.

In which areas of the European integration process can France support Serbia the most ?

France is already providing expertise to Serbia in the context of its EU accession under three forms. The first one is a strong political support in the EU institutions each time the appropriate reforms are being undertaken in Serbia. In this regards, France will be supportive of reforms that will have to be undertaken in the field of rule of law and normalization of relations with Pristina, both aspects being equally important for the future. The second aspect of the French support to Serbia in its way to EU is the provision of expertise through EU-funded programs – especially in the area of public administration reform and modernization. French experts are periodically sent to Serbia to support the efforts undertaken and one of them is also permanently attached to the ministry of European integration. A second one will soon follow. The third area of this support is the incentives to French companies to invest in Serbia to accelerate the modernization of the economy. Currently, the French companies in Serbia employ 11 000 people and France has risen to the rank of 7th foreign investor in the country.

What were your first impressions of Belgrade and Serbia ?

I have experienced a warm welcome since my arrival in Serbia. Belgrade is a pleasant city to live in, with a very interesting historic heritage, cultural events and gastronomy. I appreciate to see how friendly the Serbian population is and how much a lot of people express their interest for the French culture with a good memory of our joint history. I feel good here.